In order to keep global temperatures from rising more than 1.5 degrees Celcius, we have to dramatically decrease our emissions of carbon dioxide. We have to reduce emissions globally by 45% by 2030 and reach net zero emissions by 2050. In the United States, the majority of U.S. emissions in the transportation sector which is the largest emissions producing sector in our economy, come from vehicle road traffic. So, individuals driving their car from one place to another. EVs, electric vehicles, have the ability to reduce greenhouse gas emissions, however, the adoption rate of EVs over space is not the same. Looking at the map below you can see that the majority of people who are adopting electric vehicles live on the west coast. So what makes California so different than somewhere like Ohio? Well, there are a number of different things that impact why California has much higher adoption rates. The first is the people. The people are different and they want electric vehicles more than the people in Ohio. Another thing that makes it different is the state actually has additional incentives on top of federal incentives which make owning an electric vehicle in California, Washington, or Oregon much cheaper than owning an electric vehicle in Ohio. The third thing that most people have not considered previously is that emissions reduction from owning an electric vehicle in California is actually much higher than the emissions reduction from owning a vehicle in Ohio. That is because, in California, the majority of their electricity comes from green energy sources such as wind and solar power. Whereas in Ohio, we are much more fossil fuel-dependent, especially on natural gas. So, these emissions reductions also increase the willingness to pay of individuals willing to own an electric vehicle in California versus Ohio.

So that leads us to how can Ohio be more like California? well, we can increase incentives and we can invest in renewable energy. If we do these two things, then we will be able to close a lot of the gap of adoption of electric vehicles between incentives and emissions reductions in terms of how we actually produce electricity. In order to get to 45% reductions by 2030, net-zero emissions by 2050, we are going to need a lot more electric vehicle adoption across the country. So we need to learn from states that are doing things better than we are. 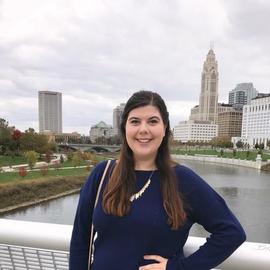 I am a 5th year PhD Candidate in AED Economics at The Ohio State University on the 2021-22 economics job market.